Built with privacy potection in mind, and using technology developed by Apple and Google, the COVIDWISE app will alert you if you have encountered someone who later reported testing positive for Coronavirus. If lots of people use this or other interoperable apps from other states, it will enable easy contract tracing and allow people to more quickly quarantine, thus slowing the spread.

The app will work outside of Virginia, but only users verified by the Virginia health department will be able to input a Covid-positive status. Per the Virginia Department of Health website, “There have been discussions regarding a federal database for positive diagnosis verification which would greatly simplify interoperability of exposure notification apps between states. It is not currently certain when this will be available.”

UPDATE: If you do every get a positive COVID test result, be sure to ask for the 6 digit pin so that you can enter your positive result into the COVIDWISE app. You need that to alert others of your result. Sadly, this isn’t given to you by default. That fact, and the lack of universal usage of the app, have limited its usefulness thus far.

Should you upgrade? To me and for most people, it depends on the camera. If getting the best quality pictures matters a lot to you, then yes. Otherwise, you could be on a 6S from 2015 and still get the latest iOS 13 features.

Download iPhone Mockups to See Which Size You Prefer

Not sure which mythical new iPhone is right for you? If you are a self-respecting iPhone user, you will print out mockups, cut them out, tape them to cardboard, and carry them around to help see which model you prefer. 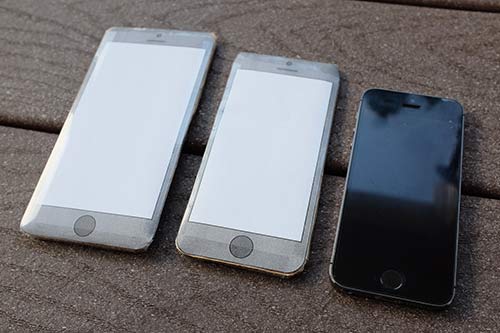 Download my mockups which show the expected 4.7 and 5.5 inch models next to the existing 4 inch iPhone 5/5s. When you print, be sure to not scale the document. Or manually enter scaling of 100%.

After cutting out mockups, tape as much cardboard as you need to reach your assumed phone thickness.

Are your hands big enough to reach the top left of the screen one-handed? If you are Shaquille O’Neal, you won’t have a problem with the 5.5 inch model. Otherwise, are you okay crimping your hand in a weird grip for one-handed operation? I can barely do this for the 4.7 inch, so the 5.5 inch would be a two handed operation for most of my use. This means I would type on the 5.5 inch iPhone like an iPad, two thumb style.

The 5.5 inch iPhone would be more difficult to use while crammed on the metro. Scrolling through an article would work, but navigating around the phone could mean a hazardous lapse of holding onto the safety bar. And no one wants to be knocked over by someone carrying a giant phone.

Does the phone fit in your pants and jacket pockets?  Do you feel like an idiot holding a large rectangle up to your head? There isn’t much time left to decide before the September or perhaps October announcement.

Tip: don’t let people at work see you using a pretend iPhone. Not everyone understands the importance of this decision.

Adding movies to an iPad with an SD card is as easy as 1 – 2 – 3, but with each step having several sub-steps and annoyances.

The SD Card Reader will pull in movies, so long as they are formatted as if they are taken from a camera. That is, they should be in the following directory:

When you plug in the SD Card to the iPad with the Lightning to SD Card Reader Adapter, you will only see movies listed with times. You won’t see the file names DCM_0001, etc.  Therefore, you need to make a list of all the movies and their associated lengths. Here’s an example of what I use to keep track of videos:

Note that I’m luckly these TV shows have slightly different lengths. That’s the only way I can tell which episode I’m importing.

If you have a lot of files, you might find it easier to “print” the file names to a text file. Here’s how to make a list of files into text on a Mac.

When viewing videos like this, there is not a zoom function that exists in the Video app player. Instead you view the cropped video through the Photos app.

So for now, the moral I take a away is that I should have just bought an iPad with more storage. But at least this solution does work.

The Verge has a preview of the final version of Windows RT which will run on the ARM-based tablets that will be priced to compete with the iPad.

Microsoft is betting big on this, but you can still see the rough edges.  Small touch targets and traditional mouse-optimized apps on a touch tablet are terrible when everyone is familiar with the easy-to-use iPad.  Microsoft is trying to have it both ways, leveraging existing apps while building new apps at the same time.  But if users need to spend any time in desktop mode, they’ll be disappointed. And it’s not powerful enough to please traditional desktop users. Hopefully this is just a short-term transition phase which will be remedied soon by lots of native touch-optimized apps.