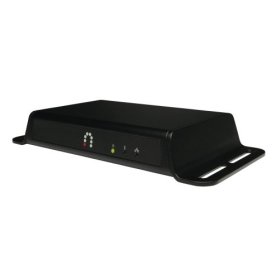 Just about everyone knows what Wi-Fi is and most people even have it at home.  Because wireless N is not yet standardized, most people are still using wireless G.  What most people don’t know is that there is an alternative that in many cases will work better than wireless G and it uses lines you already have in your walls.

Powerline connections use your existing electrical wiring.  One huge advantage is the simplicity.  Plug one powerline box into your router with an ethernet cable and the power cord into an electrical socket.  Then put your other powerline box wherever you need ethernet and hook it up to your device with an ethernet cable.  That’s it.  You’ve got internet.  Because of the simplicity, companies like Sling Media sell powerline devices like the Slinglink Turbo Powerline Kit

to make hooking up a Slingbox that much easier.

A big problem with wireless is that you never actually get the claimed speeds.  Wireless G claims a theoretical max of 54Mbps.  Cut that number in half if you have two wireless devices talking to each other. With expected interference, such as neighbor’s Wi-Fi, you can likely cut that number in half again.  In my experience, if you get 20Mbps from ethernet device to Wi-Fi device, that’s about typical.  If you’re trying to move some big data like an HD show from one tivo to another, then you’re going from Wi-Fi to Wi-Fi and only getting about 10Mbps.  This is painfully slow.

This is where powerline becomes very handy.  If you just move one of your TiVos to powerline instead of Wi-Fi, you don’t have to cut that speed in half.  Powerline can take some trial and error to setup but if you find the best plugs to use, you can expect to get near 20Mbps and some newer powerline technology claims even more.  The end result is you can double your TiVo transfer speeds because only 1 TiVo on Wi-Fi can use the full 20Mbps while 1 on powerline is also getting 20Mbps.

Finding the best places to put the powerline devices may be the hardest part.  If speed is not important, you can probably use just about any 2 plugs.  I have yet to see 2 plugs that didn’t work at least a little.  The closer they are physically on the wire, the better the performance should be so it helps to know how your electrical is ran in your house.  If you don’t know, trial and error is a must as well as bandwidth testing software such as Qcheck.

Everyone has Wi-Fi but that creates even more interference that slows it down. Powerline is a great alternative or complement to help maximize your home networking. Once wireless N is standardized, it will be much faster than wireless G but it will never be as simple to setup as powerline.

3 Replies to “Powerline vs Wi-Fi”