Because Apple and AT&T allowed people to pre-order for delivery, the line for the new iPhone 3GS at 7am today at the Clarendon Apple store in Arlington, Virginia, was about 10% of what we saw for the original iPhone and 3G.

In many ways, this was a less significant upgrade than the upgrade to the 3G. Key selling points of the 3GS include: faster speed (network and phone), video recording, better battery life, compass, and higher quality camera.

Several other upgrades are available to the previous iPhone through the recently released iPhone 3.0 OS. The new software includes cut and paste, photo messaging (available later when AT&T enables it), universal search, and a voice memo app.

I’ll probably buy the 3GS in several months when I qualify for the cheaper upgrade price. 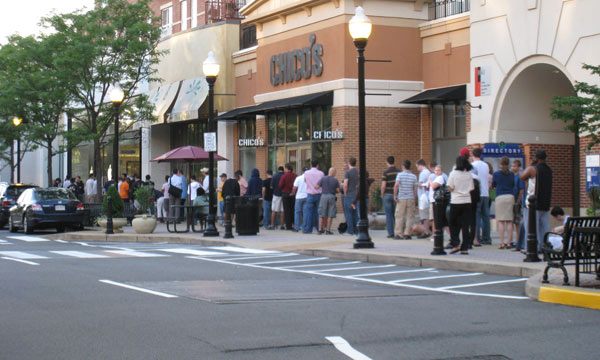