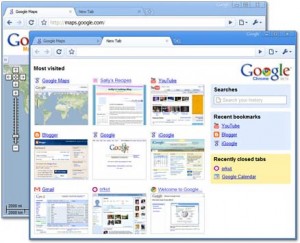 Today, Google has launched their own browser called Chrome.  There’s no doubt Google is trying to control all things on the web and this is yet another step towards that goal.  Their search engine is dominant and they’ve been trying to push online applications such as Google Docs.  By creating their own browser, they can more tightly integrate their web applications with the browser.

The first thing I noticed when trying out Google Chrome was the speed.  It felt very fast to me so I ran some simple speed tests trying to render amazon.com using the latest Firefox and Safari.  Firefox and Safari were very similar taking slightly less than 5 seconds.  Chrome did the same site in less than 3 seconds.  There’s no doubt it is a fast browser.  Google claims it has the fastest javascript engine which may be the reason it loads faster than the other browsers.

Chrome tries to simplify their browser.  The end result is the default has no visible bookmarks, menus, or even a button to add bookmarks.  Type something in the address bar like “firef” and it will list the Firefox site that you can arrow down and select.  It does this even if you’ve never been there before so the browser has some intelligence about where you might be trying to go.  It is as if Google is saying bookmarks aren’t necessary.  Another feature saying you don’t need bookmarks is the most visited page which is the default page shown when you load.  It displays the 9 pages you visit most with thumbnails of each displayed so you’re one simple click away from your most favorite sites.  You can add a bookmarks toolbar but there is no menu of any kind.

I expected Chrome to be lame and pointless since there are already several good browsers out there.  But its speed has impressed me and makes me want to see more.  Unfortunately, they have not released Chrome on Mac or Linux yet.  I’m sure they eventually will but it could be a while.

Google recently extended their deal with Mozilla, makers of Firefox, until 2011.  Google pays Firefox to have google.com be the default search.  But what will happen then when Google no longer needs Firefox to point to their search?