If you have computers or electronics that you don’t want to be killed by power fluctuations, it’s a good idea to have a UPS (Uninterruptible Power Supply). The battery in the UPS keeps your equipment running through blackouts our brownouts (reduced power).

The main problem with a UPS is that its battery might only last a couple of years. A dead battery is often announced by a UPS through regular beeping. Because a UPS is expensive, consider just replacing the battery instead of the whole UPS when the battery dies.

You can buy a replacement from the UPS company or for significantly less money from a third party such as Battery Mart. Just be sure to get a battery that is designed for your specific UPS. I have had good luck with with Battery Mart, but there are some third party batteries which are of poor quality, possibly having a short life, acid leakage, or even causing a fire. 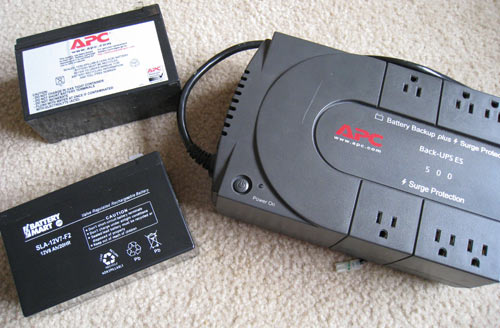 One Reply to “Replace UPS Batteries”