The long awaited Kindle 2 by Amazon

was finally announced today.  It was just as the rumors predicted in appearance.  It has several desired improvements but a few shortcomings as well. 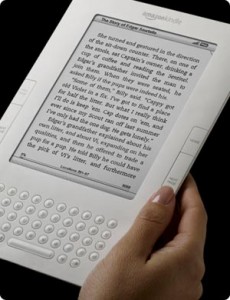 The Kindle 2 is more attractive than the original.  The new thinner design is impressive.  The tradeoff is that the device now has a bigger footprint.  In some cases the original Kindle would fit in your purse, the Kindle 2 may not.  But the same is true for the thickness giving the Kindle 2 an advantage.  With its new thinness, the Kindle 2 can probably fit more easily into some thin pockets in a bag.  Overall, the new shape is an improvement.

The page turning buttons have been redesigned.  One of the biggest complaints about the original was how easy it was to unintentionally turn a page.  The Kindle 2 buttons are smaller so they are not as easy to hit accidentally.  Another welcome improvement is pages now turn 20% faster.  The first Kindle wasn’t exactly slow at page turning but you were often left wishing the page would render just a little faster and now the Kindle 2 does.

Amazon claims “more storage” in the Kindle 2.  This is a bit inaccurate since it really just has more built-in storage.  The original Kindle had an SD card slot for extra storage which means it could hold more if you used that slot.  The Kindle 2 does have more built-in storage but has removed the SD card slot so you are stuck with just the internal memory.  That isn’t a big problem since the internal storage can hold 1,500 books now.  And if you fill it up, you can delete books but still own them.  At any point, you can have a book re-downloaded to your Kindle.  The SD card slot was probably removed to help allow the device to be thinner.  While this is technically a lost feature, it is an acceptable tradeoff for the new thinness.

The new screen is very similar to the original except that it now has 16 shades of gray.  This allows pictures to look much better.  If you just read books, this is almost pointless.  But if you read newspapers on your Kindle, this will greatly improve your reading experience.

The original Kindle included a leather book cover.  Unfortunately, now this is a $29.99 accessory for the Kindle 2.  To protect your expensive Kindle 2, you have to buy the book cover which makes the Kindle 2 more expensive than its predecessor.

Most of the changes are positive.  Overall the new Kindle isn’t a huge jump over the original, it is more of several small design improvements.  This is a device any avid reader should definitely have.  For a full description of it, check out the Amazon Kindle 2