The MicroCell is an interesting product. Some believe it is a product filling holes in a carrier’s network that shouldn’t exist. No carrier has blanket coverage and often even when there is coverage, it is worse indoors so it is nice that products like this do exist.  For $150, you can pick up an AT&T MicroCell from any AT&T store.  This is a cheaper option than some alternatives and worth consideration if you have little coverage at home or work.

Account setup is rather simple and done through a website.  You provide your address and phone numbers and that’s it.  You are limited to 10 phone numbers that can work through a MicroCell.  The good news is that it is locked down by phone numbers so your neighbor can’t use it.  Your address info is verified by GPS in the MicroCell during startup.  Unfortunately, this means the device needs to be near a window so it can get a GPS signal.  This is the oddest thing about it but apparently a requirement by the FCC.  If the GPS light does not come on, you need to move it closer to a window.  In some cases, you may need to try various windows at your house until you finally are able to get GPS.

Once you get GPS and are connected to your Internet, you can move the device as long as it doesn’t lose power.  This might be easy if are just relocating it in the same room.  If you are moving to an area with no windows, you’ll need a battery backup solution.  A cheap good option is the Tripp Lite Compact UPS

.  Once you get GPS by a window, you can unhook the ethernet and move the MicroCell and UPS (uninterrupted power supply) wherever you like.  Of course, if you ever lose power for longer than your UPS can last, you’ll have to go through that whole process again to set it up.  This battery backup approach can make sense though because placement is very important. 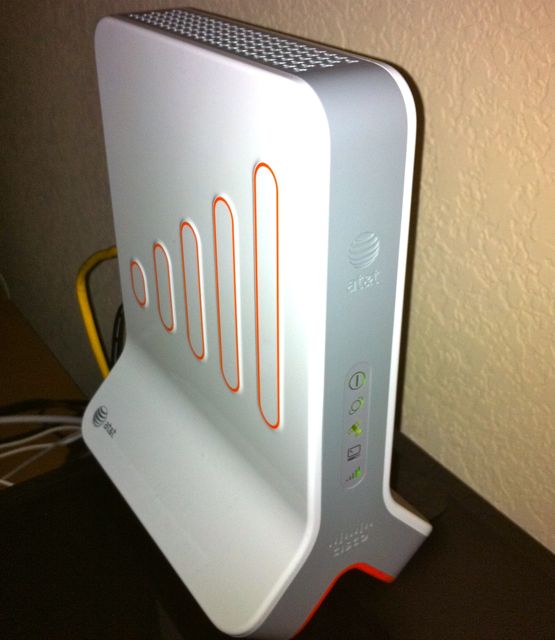 AT&T claims a 40 ft range.  This is pretty decent and works out to an area of about 5,000 square feet, even more if you have 2 floors.  You’ll drop about 1 bar of coverage per major obstacle (like a wall) so to cover a whole house, you’ll want to put the MicroCell in the most central location.  Unfortunately, central often means no windows, hence the need for the UPS approach.

Even if you’ve got 5 bars and are sitting right next to the MicroCell, your call quality might be awful if your Internet isn’t good.  This is often the cause of any VoIP (voice over Internet protocol) issues and everyone’s assumption that their Internet is good.  To test the VoIP quality of your Internet, visit this VoIP test site.  If you don’t do well on those tests, you shouldn’t consider any VoIP products.

Assuming you’ve got good Internet and good bars, the MicroCell performance is very good.  You’ll know you’re connected because your phone will say something like AT&T M-Cell instead of just AT&T.  If you’re far from the MicroCell or have many walls between it and you, your performance may suffer so be sure to place it near where you expect to make most calls.  If you’re heavily using your Internet, streaming a video for example, your call quality may suffer if you don’t have your router setup properly.

The MicroCell can go between your router and DSL/Cable modem but additional routers is rarely a good thing.  We recommend you hook the MicroCell up to your router so it can plug in anywhere on your network. We don’t recommend the use of a wireless bridge as wireless can be too sporadic for VoIP.  To optimize MicroCell performance, it should be given high priority in your router’s QoS (Quality of Service).  The MicroCell MAC address is on the bottom of the device.

Before the MicroCell, the best alternative was the zBoost YX-510 Cell Phone Booster

.  This is around $300 and requires that you have some signal near a window or in an attic.  Coaxial cable is run from an antenna to the zBoost repeating antenna.

If you’ve got poor Internet but some outside signal, the cell phone booster is your best bet.  If you’ve got good enough Internet, the MicroCell is a cheaper and superior option.  You may not like having to pay for such a device but it is a one time fee that should simply make your AT&T phones work at home.