A recent Sterling, Virginia customer got hit by a fake warning that her computer had been infected by a virus. But it was just a pop-up browser window that, when clicked, actually installed malware on her computer. To add insult to injury, the malware installed is called Antivirus XP 2008. So you think it’s there to help you when in fact it IS the infection. 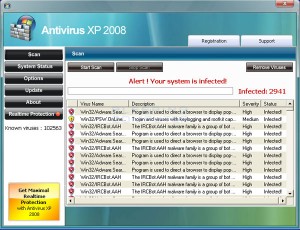 Antivirus XP 2008 shows a list of files that it claims are infected on your computer. See that the icons used are the same as those used by Windows. If you register the “anti-virus” software in an attempt to fix your computer, the bad guys will have your credit card information.

On other computers, I have seen Antivirus XP 2008 installed on the Windows Desktop background so that your wallpaper background always gave you a warning.

This has become a common computer problem. It is an easy scam to fall for because it looks very close to a real Windows warning.

This is an effective social engineering scam because people are scared of viruses and have grown accustomed to following any computer-generated prompts to remove them.

For this particular computer, I booted into Windows Safe mode and ran Malwarebyte’s Anti-malware program which is free for a couple of weeks use. Luckily the infection could be removed. In some cases, the malware can actually take over all administrator rights to the computer and rewrite the operating system to the extent that the only real alternative is to save your personal files and reinstall Windows.