The Microsoft Security Intelligence Report (SIR) outlines PC security threats and is based on data captured by Microsoft. Here is a download to the latest volume, covering the first half of 2010.

Much of the report covers recent botnets. Botnets start when a virus infects a computer, either through spam or an infected web page. The virus puts the Windows machine under the control of the botnet, typically run by criminal syndicates. The report explains how criminals use and share your information.

Viruses are on the rise. In the three months between April and June 2010, Microsoft cleaned up more than 6.5 million infections, twice as much as the same period in 2009.

This chart shows the number of computers cleaned by Microsoft, listed by country. 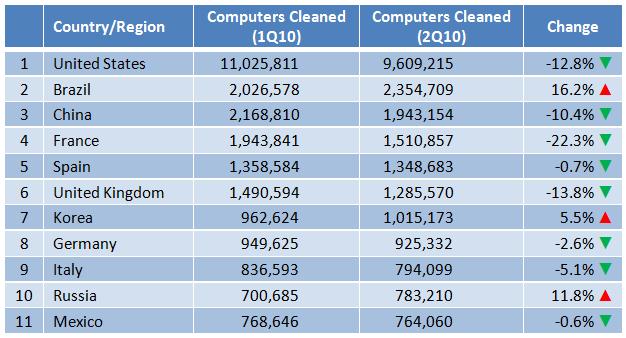 This map illustrates the percentage of computers infected in particular regions. The infection rate was highest in South Korea where 14.6 out of every 1000 machines were found to be enrolled in botnets.

As always, be sure to run Windows Updates and some form of Anti-virus. I prefer the free Microsoft Security Essentials, which I find to be just as effective but less of a memory hog than anti-virus by Symantec or McAfee.

Or you can just use a Mac which has had almost no threats. The only real-world attack that I know of for the Mac was a Trojan-infected version of Apple iWork that you would get from a pirated torrent download site. Besides that, the only Mac threats have been proof-of-concept attacks developed by researchers but never used.