Happy holidays! Unless you hate Christmas and live next to a house blaring music like this.

It’s easier than ever to find good shopping deals online. The biggest sites that aggregate online deals are:

These sites have forums where people discuss Hot Deals, Black Friday Deals, Freebies, and Coupons. This is where people go to find amazing deals.

Shopaholics also enjoy the innovative woot.com site, which sells one item a day until it is sold out. Occasionally there are “woot-offs” where they sell multiple items sequentially over a 24 hour period, each until they sell out. During a woot-off, they might sell what they call a “Bag of Crap” (BOC) which is 3 random things for $15. It could include a new Xbox 360 or it could be pens. Oddly, people on the slickdeals and fatwallet forums get very excited about the BOCs. I guess it appeals to people who like to gamble.

Some lesser-known deal sites include:

As noted in an earlier post, you don’t want to get ripped off at a big box store when buying electronics. Look at Newegg, Amazon

, and Buy.com for their deals. And whatever you do, don’t buy any cables from Best Buy. Best Buy and most retail stores sells HDMI cables 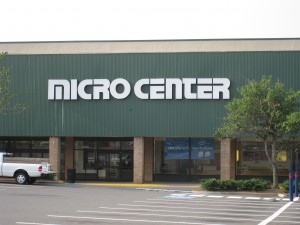 There is also no need for a warranty from Best Buy, as the items are normally insured by the manufacturer. The most common failures are discovered immediately, when you can still bring the item back to the store for a return.

If you want to shop locally in the D.C. area for electronics, the best store is MicroCenter in Fairfax, Virginia. They have knowledgable staff and a wide selection of computers, electronics, software, game systems, and TVs for reasonable prices.