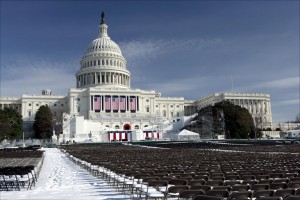 The Presidential Inauguration of Barak Obama on January 20th is expected to be a huge event, eclipsing the previous largest ever turnout since Lyndon Johnson’s 1965 inauguration with 1.2 million people. D.C. Mayor Adrian Fenty says up to 4 million people could converge on downtown Washington for the inauguration, although the Secret Service says that it expects 2 million people.

Every one of the 240,000 people attending the actual swearing-in ceremony will be screened by walk-through or hand-held metal detectors. Beyond the obvious weapons not allowed, you also will not be allowed to bring:

So while you might have thought it would be funny to point a laser pointer at the presidential motorcade, it will not be allowed.

It is likely to be so crowded that you won’t want to bring much with you besides your cellphone and camera.

Cellular carriers are adding capacity with temporary towers along the parade route. Still, with an unknown number of visitors, there is concern that the network will be overloaded.

One suggestion is to use text messages if your calls are not going through. These take up very little bandwidth and should work more easily.

Emergency responders and 911 calls will be given priority so those calls should be able to get through.

Getting to the event

All N. Va bridges will be closed to cars. You can walk or bike the bridges.

D.C. will be mostly shut down to traffic. 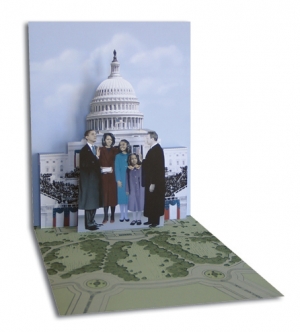 One of favorite items to commemorate the inauguration is a pop-up picture of the event that you can print out and make yourself. This low-tech print out might not be like attending the real thing, but it will certainly be more comfortable.