Galaxy Zoo is a site that has over a quarter million galaxies collected through the Sloan Digital Sky Survey (SDSS) from the robotic telescope at Apache Point Observatory, New Mexico. The astronomers need people’s help classifying the galaxies. It turns out that people are much better at this than computers.

You sign up on the site and are asked to classify a galaxy as simply smooth and rounded or having signs of a disk. You then classify how rounded it looks. There are other questions that you might be asked, listed on the How To Take Part page.

Don’t worry if you are unsure. Sometimes it is a judgment call. Galaxy Zoo presents the same image to lots of people and takes a vote on the best answer. 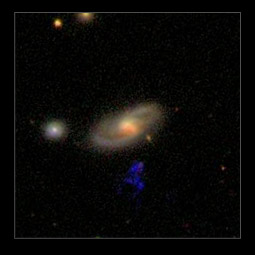 So far, they’ve learned that more spiral galaxies and blue elliptical galaxies exist than previously thought. There are an equal number of clockwise and anti-clockwise spirals. And there are some unusual objects (blue image below galaxy to the right) that have been noted for astronomers to investigate further.

It’s easy to classify stars on the site and you will be among the first people to look at these galaxies in detail.

One Reply to “Help Astronomers Online at Galaxy Zoo”