There are many factors to consider with carriers:

Price: Visible is cheap. If you figure out how to join a Visible “party pay” , you can get a single line for $25. See Reddit to join a random person’s party, still with no need to share personal information. You can add an Apple Watch for only $5/month compared to most everyone else who charge $10/month. Currently, if you let their free trial expire, Visible will offer you a $100 gift card to join.

Data Caps: The price is amazing considering it’s for unlimited data and unlimited hotspot. My AT&T plan has an 8 Gb cap. Perhaps coincidentally, after I started the Visible trial, AT&T said they’d give an an additional 5 Gb per month.

Coverage: Visible uses Verizon, so it’s arguably got the best coverage available in the US. Having traveled through Wyoming and Yellowstone, I’ve found that Verizon had better coverage. Your mileage may vary. In major cities, AT&T, Verizon, and T-Mobile should all have good coverage.

Speed: Here’s the rub. Speed isn’t great, typically at around 2-8 Mbps. This compares to around 100 Mbps from AT&T. Still, this would probably work okay if not for the ping times of 100-200ms compared to 30-40ms for AT&T’s prepaid plans. In the real world, that makes a webpage load in 6 seconds instead of 2. Carriers prioritize their traffic and give prepaid and cheap plans the lowest priority. So at busy areas and times, speed and ping times might get worse. Some Visible users claim 80 Mbps speeds but didn’t see any decent speeds or ping times in Virginia, D.C., or Wyoming.

While I didn’t make the switch to Visible, I loved their free 15 day trial using an esim. This can be added to an iPhone while not losing your existing carrier. During the trial, you’ve got two carriers. So if you’re traveling somewhere and want extra coverage or unlimited bandwidth, give Visible a try.

If you travel internationally, it’s nice to be able to put in a local-country SIM card for Internet and calls. This is far cheaper than International Roaming.

I just confirmed with AT&T that they changed their policy. They no longer unlock the SIM card on iPhones, even for customers in good standing for over a year. Compare this to Verizon that will unlock a phone after 3 months.

So if you are buying an iPhone and travel internationally, don’t chose AT&T as your carrier.

A  small office near Dulles airport in Virginia had a Business T1 line from Verizon because they didn’t qualify for DSL or cable Internet. Everything was working great for about 3 months. Then there was a big lightning storm.

When people showed up to work the next day, the Internet was down. Verizon told them that the line was good and that it was likely due to their router being hit by lightning. This seemed to make sense. But unfortunately Verizon was no longer responsible for the router after they installed it. Even though Verizon had sold them the router and set up all its configuration files, it was the office’s responsibility to diagnose any router problems and fix it. So the office asked me to take a look.

I ran a series of T1 loopback tests on the router and everything responded correctly. I even spoke to Adtran (makers of the router) and they agreed that everything looked good. So I called Verizon. Then the fun back and forth began. 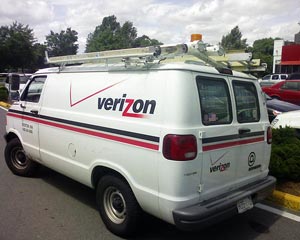 Verizon said that they were sure it wasn’t their fault because they ran their own loopback tests. I asked them to come out. Eventually they did, but they didn’t come out when they said they would so I didn’t get to see them do any tests. When they reported that everything was fine, I didn’t believe them. I knew that they hadn’t even gone into the room with the customer jack and router since no one in the office saw Verizon enter the building.

So I had to set up what Verizon calls a “vendor meet”. Verizon said this was the only way to arrange a specific time. But Verizon warned me that if it didn’t end up being their problem, the business would be charged. Verizon didn’t show up for our first vendor meet because one of their techs was sick. On their second meet, the tech noticed some weird line activity but the Internet came back up.

The next day the line was down again. This process happened three more times, with the Internet going in and out and Verizon coming out occasionally but still maintaining that it was probably the router. Four weeks after the storm, one of Verizon’s techs finally switched out their line between the phone room and the customer jack. That fixed the problem and it has been up ever since.

The router wasn’t broken. Evidently the storm somehow damaged the last bit of line that Verizon owned, but that line was past the phone room that Verizon typically tested against.

The office had been ready to give up when this was finally solved. They were going to move to a cellular Internet solution.

This story illustrates Verizon’s failure to properly handle their business customers who pay $500 per month for T1 Internet service. By not being responsible for the router that they sold, Verizon was able to just point fingers instead of properly investigating the problem. Small businesses without a tech staff have no way of dealing with that. They can’t easily log into the routers and type Cisco commands to prove Verizon wrong. These aren’t as simple as Linksys routers for the home.

Verizon should provide a business solution that is responsible for Internet all the way to the local area network. This would have saved the customer a lot of time and money.

The only positive thing that I can say about Verizon is that at least they aren’t Comcast.

The Verizon MiFi is a new device that provides Internet from Verizon’s cellular data network. What makes it so special is that it is also a small router providing Internet for up to 5 people. It can run off of a battery and is the size of a deck of cards so you can easily carry it your pocket, making you a walking WiFi hotspot. 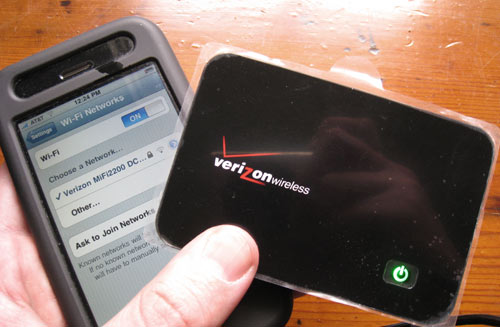 Some people, fed up with the relatively spotty AT&T network, have even used the Verizon MiFi to use a better data netwok on their iPhone.

This is a pretty good deal if you are a frequent traveler or even if you just are in a rural location that doesn’t get cable or DSL. It certainly is faster with better ping times than satellite internet.