But it can be tricky to get antenna placement correct.

I use a spreadsheet that I create from antennaweb.org data for installing HD OTA TV for DC Metro area clients. 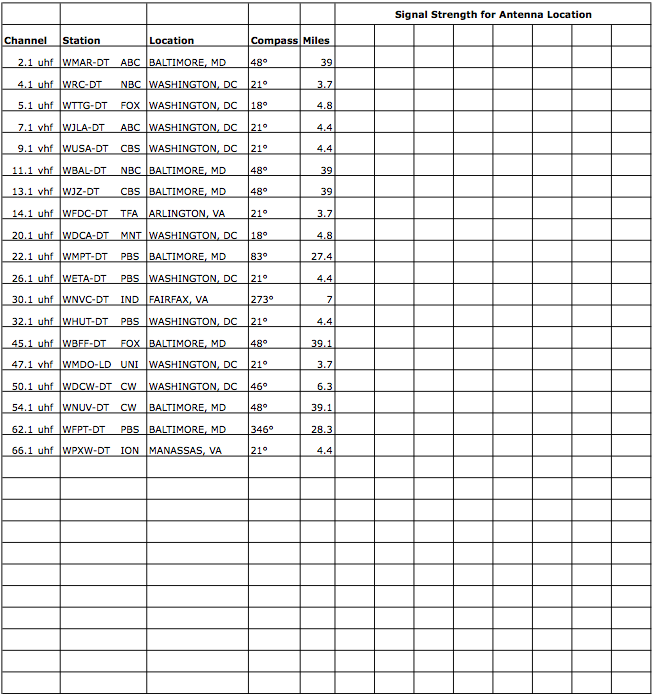 This allows you to write down signal strength numbers on all your channels using different configurations:

Generally a higher placement for the antenna is best.  For the Washington D.C. channel lineup, I have found the Winegard SS-3000 Amplified Indoor UHF/VHF Antenna

to work best in most situations, at least when located close to the city. Amplification can help for areas with weaker signals but should not be done if you already have a strong signal.

There is typically a trade-off in choosing the best configuration. A particular setup might favor one channel and hurt another because channels use various tower locations and frequencies.

Dish, the satellite people, sell the DTVPal DVR, a small box that is a digital video recorder (DVR) similar to TiVo. But this box only works with digital over-the-air TV. It gets its guide information for free digitally over-the-air as well. Therefore, unlike TiVo, it has no monthly fee. It costs $300 but is currently being sold with a $50 instant discount. 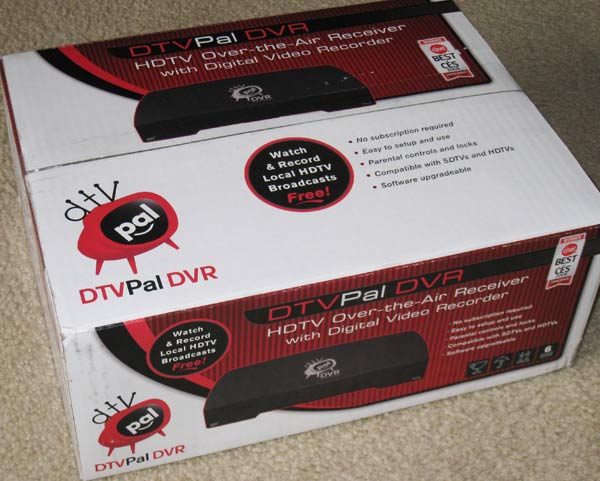 If you don’t need a cable tuner, this is a great alternative to TiVo. And if you mainly watch over-the-air programming such as NBC, CBS, ABC, PBS, then you can consider ditching cable or satellite for the DTVPal.

Dish subscribers will see that the DTVPal DVR’s Program Guide is the same as that in Dish’s satellite boxes: 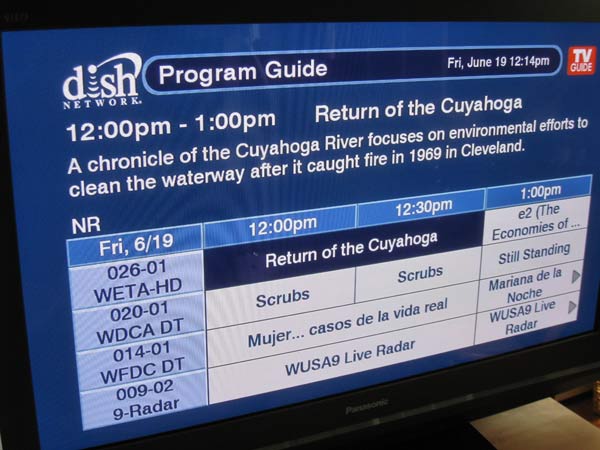 When we purchased this box, it was clear that the Dish company is still setup to only deal with satellite sales. We got an email welcoming us as a Dish subscriber and referencing their satellite offerings. We even got a service bill for $12.95. After calling Dish, we found out that this was actually just the tax due on the purchase of the box. But the bill made it look like we were Dish satellite subscribers.

Despite those annoyances, this is a great box that makes your television viewing more productive by allowing you to time shift your TV shows.

. This is a massive 17 foot antenna. It’s size allowed it to pull in all the available digital television signals with a strong signal. 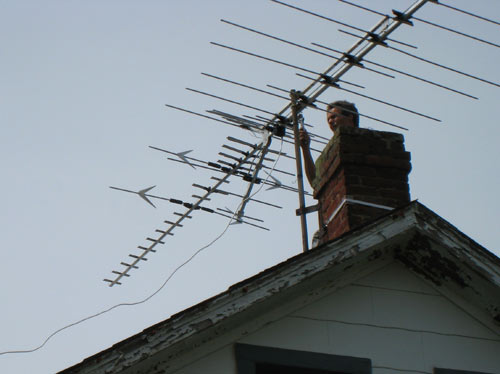 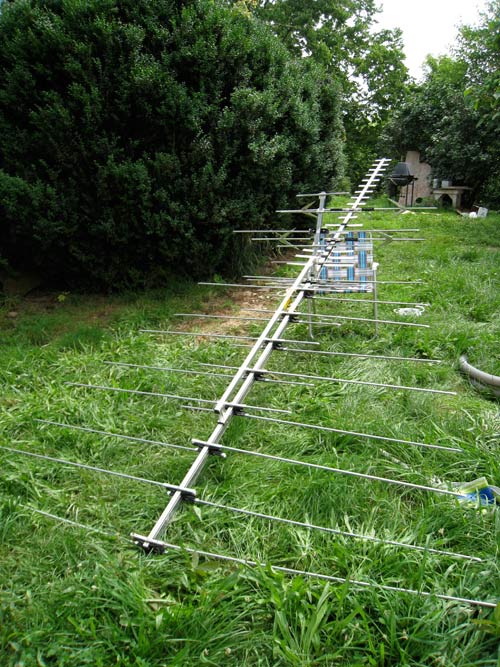 In honor of today’s shut-off of analog over-the-air TV, we’re posting a link to this humorous video showing the difficulties of the digital transition. 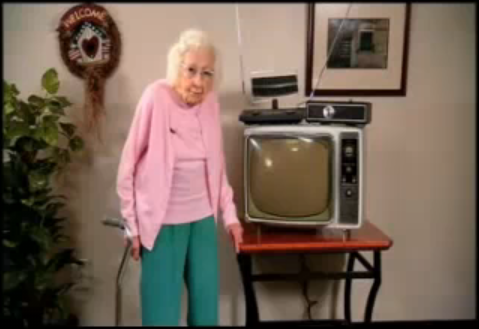 The over-the-air free TV that is available with an antenna has been available in both digital and analog formats during the transition to digital TV. Midnight tomorrow night, June 12th, the analog signal will be shut off.

At Tech DC we have been helping a few customers, especially those who have extra TVs or who live in rural areas not served by cable, to switch to Digital TV. See Tech DC’s 7 Misconceptions about Over-the-air Digital TV. And remember that if you do get TV through analog over-the-air transmissions, then you can request $40 coupons toward a digital converter box.

Almost 3 million U.S. homes — 60,000 households in the Washington area alone — could wake up Saturday to a blank TV screen.

By midnight tomorrow, all of the nation’s full-powered TV stations will shut off the analog signals that brought the iconic shows “I Love Lucy” and the “Cosby Show” to millions of living rooms, marking the biggest change in television viewing since the advent of Technicolor. In their place, broadcasters will air a new breed of digital broadcasts intended to bring crisper pictures and sound to shows like “American Idol.”

At the end of this long-awaited and troubled transition, the government will have made $20 billion from the sale of the old

analog airwaves, the telecommunications industry will be able to offer brand-new, high-speed wireless services, and public-safety officials will get access to airwaves for a new nationwide communications network.

But people have been left to deal with some unsatisfactory results of the poorly managed, government-mandated transition. The education campaign was uncoordinated, a federal program to help people pay for converter boxes ran out of money, and many were not informed that they might need additional equipment to receive TV service.

Those most at risk of losing programming — seniors, non-English speakers, low-income viewers and rural residents — are among the more than 14 million households that rely heavily on over-the-air signals to receive critical public-safety alerts, news and weather reports.

“The problems for those people will be much greater than the forecast,” John Carey, a professor of communications and media management at Fordham University.

Older analog sets that rely on rabbit-ear antennas will need a converter box, which costs $50 to $80. TV sets with digital tuners will receive broadcasts, but viewers will need to adjust antennas and in some cases install more powerful ones.

For Maria Rubio, 67, of Langley Park, the TV has been a constant companion since her husband died two years ago. She watches five to six hours of television a day with the dial fixed on Spanish-language talk shows and telenovelas on Univision. She does not speak much English.

Rubio is worried that her pastime may disappear come Saturday. A neighbor’s teenage son hooked up a converter box, which she bought with a government-sponsored coupon for a $40 discount, to her 16-year-old TV. But she may also need a new, stronger antenna for reception.

That’s because digital signals do not travel as far or hold up to interference as well as analog. Analog signals will show a snowy picture for viewers on the edge of a station’s coverage area. But with digital signals, even the smallest obstruction — a tall tree in the yard or an airplane flying overhead — can cause the picture to freeze and sometimes disappear altogether.

Rubio said she cannot afford to buy a new antenna. “We almost could not pay for that [converter] box,” she said.

Much of the government’s education campaign focused on just getting consumers to buy converters boxes. Critics say officials waited too long to tell viewers that they will likely need a new antenna and will have to scan frequently for channels.

More than one-third of the callers to the Federal Communications Commission’s DTV call centers have cited reception problems.

The twice-delayed transition to all-digital television has been in the works for more than two decades and, when all is said and done, will have cost nearly $4 billion.

Congress had mandated that all full-power stations convert to digital signals in 2006. But the switch was pushed back to Feb. 17 because of consumer confusion and lack of equipment.

Two weeks before that deadline, Congress voted to again postpone the switch, this time to June 12, after a $1.5 billion program ran short of funds to distribute $40-off coupons to offset the cost of converter boxes. Ultimately $650 million in stimulus funds was allocated to the preparation efforts.

Nearly 800 stations, mostly in smaller markets, went ahead with the transition in February, and six more will make the change by today. That leaves 974 stations in major cities to make the switch tomorrow. Stations will be shutting off analog signals throughout the day tomorrow. In the Washington area, the CBS and ABC affiliates plan to do so in the morning, while the rest plan to make the switch between noon and midnight.

Broadcasters hope the new digital programs and improved channel offerings will lure back some viewers who subscribe to cable and satellite services. Less than 15 percent of U.S. viewers rely on free over-the-air television.

But analysts say the digital transition has instead prompted a number of people to switch to a pay-TV service to avoid the hassles of upgrading TV sets.

About 5 percent of U.S. households have subscribed to a cable or satellite service in the past year, according to a survey conducted by research firm Knowledge Networks. Jeffrey Wlodarczak, managing director of Hudson Square Research in New York, estimates that the pay-TV industry will gain nearly a half million customers in the switch.

For example, Time Warner Cable, the nation’s second-largest cable company, said it added 80,000 over-the-air customers in the first three months of the year. Satellite provider DirecTV said it signed up 50,000 to 100,000 over-the-air viewers.

“It has clearly offset the losses for companies that were already under economic pressure,” Wlodarczak said.

Sales of digital TV sets have tripled in three years, and people are expected to buy a record 34.5 million sets this year, according to the Consumer Electronics Association.

A growing number of households, however, are not watching TV the way they used to. Many now access programming through Internet-based platforms such as Hulu.com, which hosts a large catalog of new and classic shows.

Ben and Katie Hallen of the District use a Roku digital video player to stream movies and TV shows from Netflix, iTunes and Amazon.com.

“Cable was optional for us, but Internet was not,” said Ben Hallen, 30, an assistant professor at the University of Maryland. “This way we can watch things on our own schedule. I don’t feel like we’re missing out on anything.”

But about 30 percent of U.S. households are not online, and 80 percent of the nearly 14 million homes that rely on over-the-air broadcasts have never logged onto the Internet, Carey said.

Despite the inconveniences, economic experts say repurposing the old analog airwaves for wireless broadband services and communications networks for emergency responders is the most prudent use of resources.

Wireless companies have spent $20 billion for the rights to those airwaves, and federal officials hope it will help expand the reach of high-speed Internet to all corners of the country.