eBay has recently announced new seller fee prices to take effect at the end of March. While they announced “lower insertion fees”, if you are selling something that sells for between $50 and $1500, your total fees will end up much higher.

The following table shows how the total fees will change. It assumes you start your auction at $0.99.

So unfortunately, most items you sell will have much greater fees, especially around the sweet spot range of $100-$500 where fees are about double to triple what they were. eBay has done this before where they announced the lowering of insertion fees but in reality it is an increase in total fees.

Rumored for years, the Apple iPad is finally here. Starting at $499, it is a major new product that will compete with notebooks and eBooks. See the full video from Apple’s presentation today. 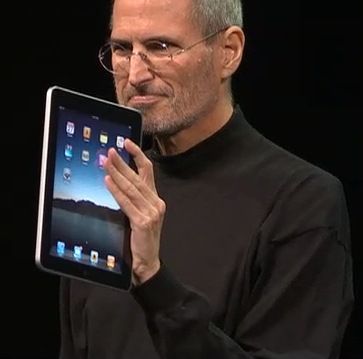 Google’s Crisis Response page for the Haiti earthquake has news, donation links, maps, satellite imagery, videos, and a Person Finder tool to look for or report on missing people.

This video is from the White House Haiti Earthquake Relief  site:

I used to tell people that the newest Internet Explorer 8 was safe enough. But recent events have changed my mind. The Chinese attacks on Google over Christmas were perpetrated using a vulnerability that exists in all versions of Internet Explorer. Microsoft still hasn’t fixed this.

Because of security concerns, both the German and French governments have officially recommended that people not use Internet Explorer. One could attribute this to the EU’s dislike of Microsoft, but Mircrosoft has a more fundamental problem.

Unlike the Gecko engine powering Firefox or the Webkit engine powering Chrome and Safari, Internet Explorer has its own broswer engine that is closed source. This means that people can not look at how it is written. While you might initially think that this makes Internet Explorer more protected, it’s actually the opposite. Open source code can be reviewed and improved by the entire development community. Once a problem is seen, any developer can suggest a solution. The response time of Firefox for fixing exploits is typically days compared to Internet Explorer taking weeks or months.

The fastest browsers use Webkit as their engine. These include Google’s Chrome and Apple’s Safari browsers.

Mozilla Firefox is slower but remains the current leader among alternative browsers, largely due to its popular add-ons. Google is working on growing out its extensions to compete with Firefox add-ons.

Give one or more of these browsers a try. 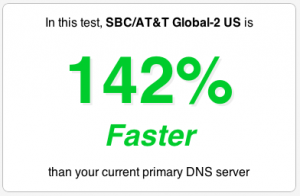 When you go to any website, the browser first has to lookup where that site is located.  This is done by connecting to a domain name server (DNS).  There are many DNS options, not just the default of the ISP. Often other options are much faster.  Most websites actually load content from various domains at once so each DNS request adds up in how fast your internet experience feels.

A great open-source DNS benchmark utility is namebench.  It will test your current DNS against other global DNS or nearby providers.  Versions for Windows, Mac, and Linux are available for download.

A recent customer had OpenDNS setup but it turned out the nearby AT&T DNS was 142% faster.  Most people probably won’t get quite that huge of a gain.  Depending on your location and ISP, its hard to predict what your best DNS option is which is why the namebench utility is so valuable.

Once you’ve figured out your best DNS options, it is best to setup the DNS in your router through its administration page.  You could change the DNS in your computer’s network settings, but then none of the other computers on the network would see that gain in internet performance.