There are many flavors of wireless networking. Most common are 802.11B, 802.11G, and now 802.11N (Draft). 802.11N is “draft” because the standard has not yet been formalized, despite the sale of draft-N devices for over a year. For most people, this won’t cause a problem. But hitches do come up.

When I was recently setting up a D-Link draft-N router with a MacBook Pro, I noticed that the wireless connection would drop regularly or show a connection but be unable to receive/transmit. This was due to the incompatable N implementations. The solution is to go into the router settings and switch it to only using B/G. In most cases, I have found draft N devices to work without any issues.

The 802.11N standard is expected to be finalized by the IEEE LAN/MAN Standards Committee (IEEE 802) in November 2009. Then all the current draft-N manufacturers promise a firmware upgrade that will make them interoperable. Of course by November 2009, we might be looking at buying new draft wireless standards, as described by PC Magazine:

802.11s, a mesh networking specification that’s been on the drawing board since September 2003. (It probably won’t be final until September 2010.) Laptops and other devices with 11s support will function as mesh points (or MPs) and form links with each other, allowing packets of data to skip from device to device across the network as needed. Mesh has been around for a while in many proprietary forms, and is important not only because it can extend a network’s range but also because it has self-configuring abilities: Mesh devices can move about without impacting overall performance. In such a network, data will hop around from mesh point to mesh point along the shortest path to where it needs to go. Actual 11s is already in use in at least one product: the One Laptop per Child project’s XO laptop uses it to communicate with XS school servers, in some tests over distances as great as 2km with 802.11s data hops from device to device.

802.11u, called “InterWorking with External Networks,” will provide a Wi-Fi device with methods of connecting securely to a network, based on the external network’s type. For example, if you have access to the cellular connection that provides Internet access to the Wi-Fi router on a bus, 11u will keep that connection secure. It will also allow a Wi-Fi device to discover more information about that external network, such as whether it’s free of charge or not. 11u could be published by March of 2010.

802.11z “Direct Link Setup” is the 802.11 Working Group’s take on improving ad hoc connections, at least for business users. It’s entirely unrelated to what the Wi-Fi Alliance is doing for device-to-device communication. 11n allows two laptops that would normally communicate on a secure network to form a P2P connection to talk to one another exclusively. This happens only after they’ve authenticated security credentials through an AP. It’s a super-secure ad hoc that requires the right security setup.

See a full list of 802.11 standards and approval timelines from IEEE.

We wrote earlier about the Apple store design for Georgetown being rejected. The Washington Post writes that it just happened again:

An architectural review board yesterday ordered Apple to redraw plans for a store in Georgetown, the fourth time it has rejected the company’s submission.

The Old Georgetown Board told Apple’s architect that it is eager for the store to open on Wisconsin Avenue. But the three members, all architects, expressed disappointment that Apple keeps proposing a design that they have criticized. 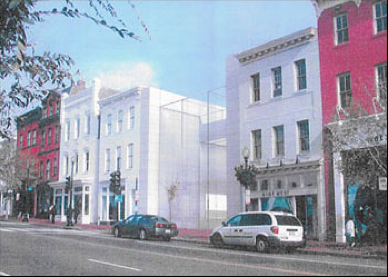 In the latest rendering, Apple proposed a storefront that is a 35-foot-wide pane of glass with a door. During previous rounds, the board said that was inconsistent with neighboring properties’ detailing and bay windows. “We’re frustrated a little bit because we haven’t gotten a response to our fairly consistent request,” board member David Cox told Apple’s architect, Karl Backus.

Backus assured the board that Apple is not “purposefully ignoring your suggestions,” although he noted that a glass expanse is standard for many of the company’s storefronts, symbolizing its belief in transparency. Still, he said he would return with a new design proposal that would incorporate the board’s suggestions.

Apple’s struggles to win the board’s support have fueled concerns among merchants and city officials over how long the company is taking to open a store that it began planning at least two years ago.

“The community and the Fenty administration are very supportive of this retailer opening its Georgetown store,” he said. “I’ll move quickly to convene separate meetings with the Old Georgetown Board and Apple representatives to reach a consensus design.”

Amy Bessette, an Apple spokeswoman, said in an e-mail that the company remains committed to “bringing the unique Apple retail experience to Georgetown.”

In 2007, Apple paid more than $13 million for the three-story building on Wisconsin Avenue. The building is 24 years old but it is within a historic district with buildings more than 100 years old.
ad_icon

Apple plans to raze the building and put up a store, joining 251 retail outlets it has around the world, including five in the Maryland and Virginia suburbs.

But first it must win the approval of the Old Georgetown Board, which is overseen by the U.S. Commission of Fine Arts.

Apple submitted its first renderings to the board in September 2007, a two-story building with five windows across the second floor and an expansive show window. The board told Apple that the ground-floor window was out of scale with neighboring storefronts.

After the Old Georgetown Board asked for revisions, Apple returned with two more modern versions, and both were rejected.

The renderings the company displayed yesterday were largely indistinguishable from the first round.

At yesterday’s hearing, Stephen J. Vanze, an Old Georgetown Board member, told Apple’s representatives that he was feeling pressure at home to approve Apple’s plans.

“My daughter said, ‘We better get an Apple store in Georgetown,’ and I better make her happy,” he said.

But Vanze reminded the audience that the board’s sole mission is to “review design issues.”

“For us to do our job, we need to protect the street,” he told Apple’s architect. “We want to help you do this. Again, we ask you to modulate the glass.”

After the meeting, Backus said he hoped to return with a new design next month. “We don’t want to drag this out further,” he said.