The incoming Obama team has written Congress asking for a delay of the planned February 17th turn off of analog over-the-air TV signals. While most people won’t notice this eventual transition, there are some hurdles.

The loss of analog over-the-air signals will not affect most people who use one of 1) cable, 2) Satellite (Dish or DirecTV), 3) digital over-the-air (still using an antenna), or 4) fiber (FIOS TV service). Most people in the D.C. area will not be affected. TVs made in the last couple of years should have digital tuners, known as ATSC tuners. 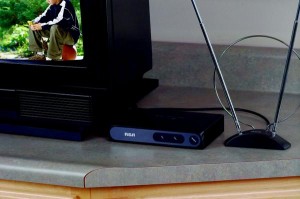 In my experience setting up home theaters and TVs in the DC metro area, I have found some problems that will likely come with this transition: 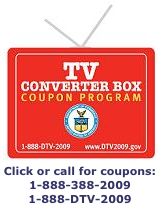 The Obama team has requested a delay because the National Telecommunications and Information Administration (NTIA), which is to provide education and $40 vouchers for people to buy digital TV converter boxes, ran out of money on January 4. There is also concern that many people, especially poorer and more rural areas, have not yet heard that they will need a converter and a larger antenna.

To find out what kind of signal you can expect and what kind of antenna you need to get digital programs, see AntennaWeb site and click Choose an antenna. Another useful site is HDTV Hub, which lists many users experiences for their particular locations. You can find out through these sites what kind of over-the-air HDTV experience that you can expect.

Most high profile hacking today is for profit. The Russian mob and other criminal gangs are often involved in taking over computers, stealing credit cards, and threatening websites with denial-of-service attacks.

That’s why it was somewhat refreshing to see what a hacker did to Twitter yesterday, breaking into 33 celebrity accounts to leave messages on their behalf.

Here’s what CNN’s Rick Sanchez got: 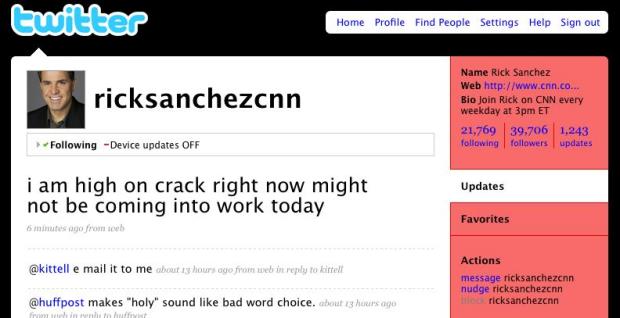 The break-ins were tracked down to someone called Gmz from a site called Digital Gangster. It is not yet known if Twitter will pursue the matter legally. If money was made from affiliate accounts, it should be easy to track the person down. A post on the Digital Gangster said:

“That guy [who hacked the sites] must have been a very generous individual. To hand out accounts rather than use that for profit. Could it be enough for respect or just enough for that user to be identified as an “idiot”?”

Microsoft recently reported that their Malicious Software Removal Tool (MSRT), which was included in Windows Updates on December 9, 2008, has now removed over 400,000 copies of the nefarious “Antivirus 2009”.

An Arlington, VA client was recently infected by that Antivirus 2009 malware. It has been the most pernicious malware that I have seen recently, as most users can be tricked into installing it. Many fake sites exist that you might find during a normal web search. The sites appear to be a standard Windows Control Panel page which pretends to search for and find viruses. If you click “Ok” or “Remove All” you will be infected.

It will eventually take away all administrative rights from you and ask for your credit card to update and remove the viruses. Of course, it never removes anything, but instead gives your credit card info to the bad guys to use as they wish. Your computer is also a zombie ready to do whatever they ask of it.

The problem is that the dialog boxes and alerts look just like legitimate ones that might appear from Microsoft. See the fake Antivirus 2009 alert above.

I mentioned another variant of this malware called Antivirus XP 2008 in an earlier post.

While there are other tools you could use, Microsoft’s Malicious Software Removal Tool (MSRT) is a real solution that will remove and protect the computer from this Malware. It is available as a critical update from Microsoft.

It is not always apparent how to run Microsoft’s Malicious Software Removal Tool (MSRT). If you have it installed, you can just go to Start – Run and they type mrt

The Tech DC website is partially supported by our affiliate sales. Support us by purchasing through these links.